Parsad or prasad is an Indian sweet treat made to be offered to the Supreme Being during Hindu prayer ceremonies before being distributed to family and friends.

The term ‘prasad’ literally means gracious gift and can be anything vegetarian and edible like fruits.

Trini parsad is typically made with ghee (clarified butter), flour, milk, sugar, raisins, and spices. Cream of wheat can also be added.

My family uses cream of wheat in our generations-old recipe, which makes about 50 parcels of parsad.

We make the dish for prayerful celebrations like birthdays and Divali. We usually use a metal ‘chulha’ (traditional Indian stove).

You may need to half the recipe and adapt alternative techniques if you want to recreate this recipe on a much smaller scale.

Ingredients for Cream of Wheat Parsad

Here’s everything we use in this traditional Trini parsad recipe:

You’ll need one pound of ghee for every two pounds of flour. And, every pound of flour will make 10 parcels of parsad.

How to Make Parsad

If you are using fresh bay leaves, wash and dry them properly since they’ll be going into very hot ghee after. Or use dried leaves.

Also, wash and dry your stirring utensil – we use a long, wooden dabla (a traditional, thin Indian cooking utensil). You can get similar tools on Amazon like this wooden spatula or longer stir paddle.

Sift the flour to remove any lumps and set aside.

Add the milk powder to lukewarm water. Whisk until there are no more lumps. Strain (to remove any tiny lumps) and set aside.

If you are using whole cardamom (elychee) pods, grind them in a coffee grinder until fine. Sift to remove large pieces. Regrind these pieces and sift again. Or simply use cardamom powder.

Finely grate the ginger. It’ll be easier if you use frozen ginger and a zester. The key here is to ‘finely grate’ as you don’t want any strands of ginger in your parsad. So, be sure to squeeze their juices out and remove them.

Make paag (simple spiced syrup). To do this, heat the required water in a large pot.

When hot, add the sugar and stir to dissolve. When the water achieves a rolling boil, add the ginger and ground cardamom and continue boiling on low heat for 15 minutes. Turn off and keep very hot.

Wash the raisins. Drain and set aside.

I recommend having more than one person on hand to help you make this recipe.

Place large, heavy pot on your ring stove, chulha, or regular stove. Here’s a look at the metal chulha.

Allow to heat up on medium heat. This can take about five to ten minutes.

Add the ghee to the hot pot. Stir with the dabla as it melts. Continue stirring occasionally for a couple minutes.

Next, add in the bay leaves. They tend to fry in the oil and release their unique flavor. Stir occasionally again for a couple minutes.

Increase the heat to high. Now, it’s time for the muscle.

Add all the flour to the hot ghee and stir continuously for five minutes. You must stir quickly to ensure the flour is completely incorporated in the ghee. If you stir too slowly, you’ll see small, round ‘flour balls’ developing. Tag someone in if your arms get too tired.

The high heat will ‘patch the flour’ and cause the parsad to develop a nice, golden brown color. When it is the desired color (usually after five minutes), turn the stove down to low heat (or remove a couple pieces of wood in the chulha).

Continue stirring (slower than before) for the next 15 minutes.

Add in the cream of wheat. Incorporate for another two minutes.

Increase the heat to high heat.

Things move very fast from this point and you’ll need a couple helpers.

It’ll get really difficult to stir now, but power through. The parsad is done when it has absorbed the liquid and is dry.

Remove from the pot immediately. Transfer to a large bowl and turn occasionally to allow the parsad to cool.

In T&T, there are some misconceptions about parsad among non-Hindus to the point where some even refuse the dish.

Let’s clear a few things up.

In Hinduism, the Supreme Being (i.e. God) in Hinduism is considered omnipotent, omniscient, and omnipresent – ever powerful, ever knowing, and everywhere.

The Bhagavad Gita (including chapter 11) and many scholars have argued the human mind cannot comprehend the totality of what God is.

Therefore, representations of attributes of God have been used to keep the mind focused during prayer; much like using objects or dots on a wall to focus the mind during meditation and mindfulness exercises.

These representations are sometimes in the form of photos and statues of Hindu deities.

They are revered. But they are not God.

So, it is uninformed to suggest Hindus perform ‘idol worship’.

Now, let’s talk about havan, the ritual that involves offering parsad to fire while saying prayers.

Havan is rooted in Vedic traditions that date back before 3,000 BCE and have spanned the entire of south Asia from Afghanistan to Japan. Hindus, Sikhs, Jains, and Buddhists perform some version of the fire sacrifice ritual today.

It is all symbolism. Fire is symbolic of cleansing oneself and of pure energy (which God is).

So, when something is symbolically and prayerfully offered to fire, it signifies a way to cleanse oneself and a way to offer love to the highest form of energy.

Think of those bonfire exercises where you write on a piece of paper, say your hopes and wishes and then throw the paper in the fire. It’s a pretty similar concept.

Now, what can we possibly offer to God to show our love and say thank you? Something sweet and delicious maybe? Something like … parsad?

It is offered in havan before being distributed to guests of the prayer ceremonies, family, and friends.

While it is a little sad that some refuse parsad in such a diverse society of ours, there are no hard feelings. We often give them fruits and other sweet treats like kurma and gulab jamoon instead. 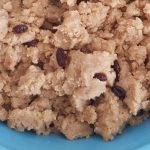 link to 25 Short Empowering Quotes to Inspire You

These short empowering quotes have gotten me through some tough times. I hope they help you too. As an Amazon Associate, this site earns from qualifying purchases. I found these quotes from the...

Continue Reading
link to How to Make Trini Sada Roti: My Mom's Recipe and Instructions

Sada roti is a popular breakfast food in Trinidad and Tobago. It is derived from East Indian rotis and chapatis which are used as scoops for curries and gravies. As an Amazon Associate, this site...

I share Trinidad food and Caribbean recipes on this site.